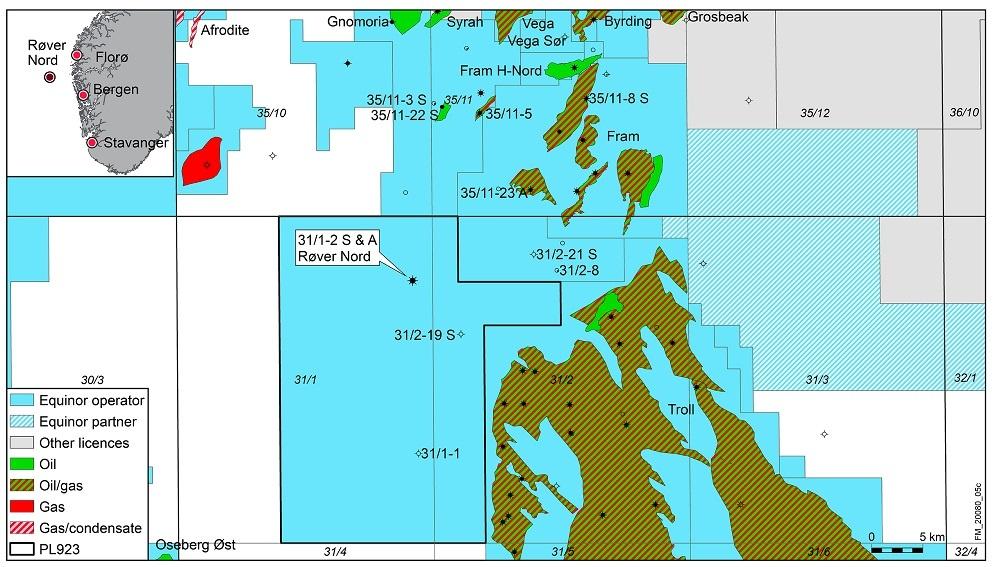 Equinor and partners DNO Norge, Petoro and Wellesley Petroleum have struck gas and oil in production licence 923. Recoverable resources are estimated at between 7-11mn cu m of oil equivalent, corresponding to 44 – 69mnboe.

“The discovery is a direct consequence of thorough subsurface work in the Troll/Fram area over many years, and shows the importance of not giving up, but starting over, looking at old issues from new angles. Exploration thus creates great values for society, at the same time as the resources can be realised in accordance with the requirements for CO2 emissions through the value chain, from discovery to consumption,” commented Nick Ashton, Senior Vice President for Exploration in Norway at Equinor.

Both wells proved hydrocarbons in two intervals in the Brent Group. Well 31/1-2 S encountered a c.145m gas column in the Brent Group (Etive and Oseberg formations) and a 24m oil column where the oil/water contact was not encountered. A total of 50m of effective sandstone reservoir with good reservoir quality was found in this interval. In addition 6m of oil-bearing sandstone with moderate to poor reservoir quality was struck in the upper part of the Dunlin Group.

The Cook formation proved to be water-filled in both wells, but with moderate to good reservoir quality. The wells were not formation tested, but extensive data acquisition and sampling took place.

The licensees consider the discovery commercial, and will explore development solutions towards existing infrastructure.

Previous discoveries in the region

The Røver North discovery adds to a number of discoveries in the Troll/Fram area in recent years such as Echino, in the autumn of 2019, and Swisher in the summer of 2020. Recoverable oil equivalent from these three discoveries can already measure against the total production from fields like Valemon, Gudrun and Gina Krog.

“It is inspiring to see how creativity, perseverance and new digital tools result in discoveries that form the basis for important value creation, future activity and production in accordance with Equinor’s climate ambitions,” said Ashton.