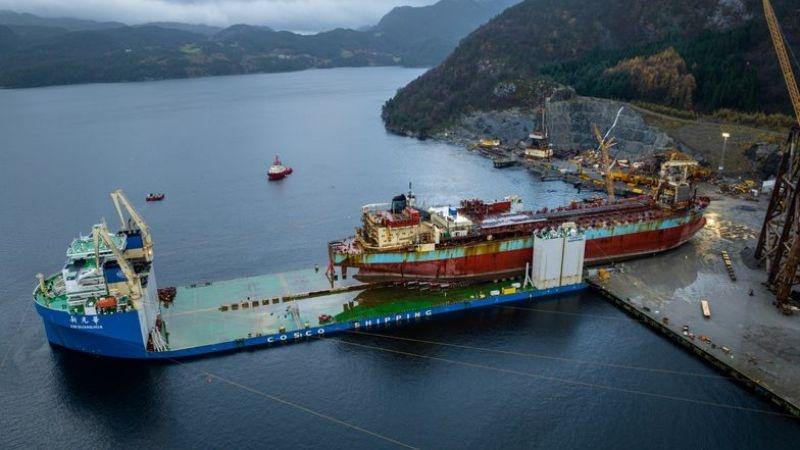 The recycling operation of Curlew, an FPSO vessel, has started in Vats, Rogaland, this week, with the 235 m-long ship loaded-in by a float-over and subsequent site move operation.

The vessel will now be cleaned, dismantled and at least 97% of it will be recycled.

This is the first time this type of vessel has been recycled in Norway. The production vessel, Curlew, was operated by Shell UK, and produced oil and gas from the Curlew field in the UK sector in the North Sea. The chosen decommissioning solution known as a float-over-float-in operation has never been used on such a large scale anywhere in the world. The contract was awarded to AF Offshore Decom through competitive tendering, and includes engineering, preparatory work, dismantling and recycling.

Dismantling and recycling of offshore installations and ships is an important part of the green transition. Here, Norwegian industry and engineering expertise have developed solutions that are at the forefront of the industry. This provides tangible evidence of the circular economy given nearly 97% of the ship can be used as raw materials in new production, with steel being used as rebar in new buildings, and all hazardous waste is taken out of the system and disposed of in a responsible manner.

“This is a very complex logistics project with significant marine operations. We are proud that we can carry out such complicated operations in a safe and environmentally sound manner," said Lars Myhre Hjelmeset, Executive Vice President for Offshore in AF Gruppen.

“We have considerable experience in recovering offshore installations and floating production vessels is another area where our expertise and approach is both relevant and internationally recognised. Complex operations like this show that Norwegian offshore and engineering expertise helps set the standard for safe and environmentally sound solutions," commented Hjelmeset.