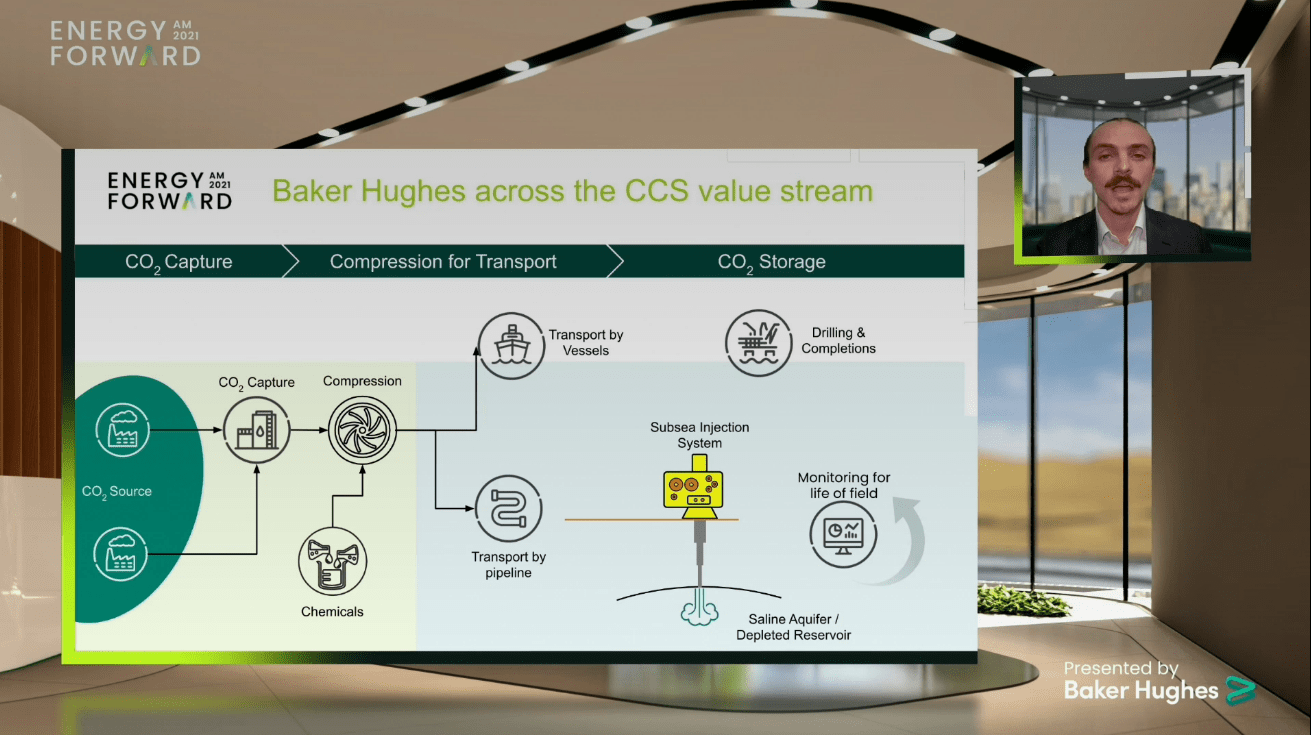 Baker Hughes has committed to reducing its carbon emissions by 50% by 2030 and achieving complete net-zero status by 2050 and, in pursuit of these objectives, engineers from the company have been developing innovative solutions with perhaps the most complex of these centred around subsea technology and carbon capture and storage (CCS).

At the Baker Hughes Annual Meeting 2021, which took place virtually on 1-2 February, Julian Tucker, front end regional lead for Europe, Middle East and Africa at Baker Hughes, provided an in-depth presentation on CCS and explored the company’s projects around this technology.

Tucker explained, “CCS is a process where CO2 is captured from various sources and injected into a suitable store rather than being released into the atmosphere. One application of this technology is to capture CO2 from industrial emitters, transport it offshore via pipeline or vessels and then inject it into depleted oil and gas reservoirs or even saline aquifers. These offshore locations are ideal candidates for C02 stores given their proven capability in trapping fluids underground, as well as the fact that they live in mature basins such as the North Sea which have been comprehensively explored and appraised.”

Focusing on the injection system, Tucker outlined three key considerations that must be taken into account when developing technology for this; phase behaviour of CO2 and the impact of this can have; corrosive potential of CO2; and considerations of long step out distances to some of these offshore locations.

Tucker commented, “CO2 is most efficient when transported in a dense phase, so is condensed and pressurised and can be in a supercritical state. This has several implications for materials selection, including solubility effects and fracture toughness. There is also the potential for low temperatures in the system which can occur if expansion drops due to pressure. This effect can be significant, especially when associated with a change of phase. The system therefore needs to be designed to manage these changes and the materials need to be properly selected and tested for these conditions.”

“CO2 is also highly corrosive to steel when water is present, and this will ultimately depend on the water content in the process stream. This can be mitigated by materials selection, dehydration processes or even through the use of chemical inhibitors, of which Baker Hughes has several dedicated products,” Tucker continued.

Tucker added, “It is important to note that CO2 injection systems are inherently different to hydrocarbon production in their operation as well as defining characteristics. These are governed by technical and economic drivers unique to these developments. In that regard there is great opportunity for simplification, but careful consideration of the type of CO2 store, the modes of operations, as well as the system design is needed to make sure equipment is fit for purpose.”

Tucker continued, “Baker Hughes is not only able to leverage decades of experience in the oil and gas industry but also with our experience from having delivered the worlds first subsea CO2 injection system for dedicated commercial storage. This was at Equinor's Snøhvit field. We actually supplied a record setting electro-hydraulic subsea control system for the 175km step out which is actually qualified for 220km.”

Tucker also mentioned other planned CCS projects that Baker Hughes has in store such as developing an all- electric system which can negate the need for hydraulic line in the umbilical. This has the potential to save significant costs for long offsets.

“I think the industry needs to build on the great strides that have been made in recent years to reduce costs and inefficiencies and really apply that mindset to CCS and to take it further even to really support these developments in their infancy and allow CO2 storage networks to grow.”

CCS and the push for sustainability

Tucker stressed he believed that CCS would really help the industry achieve its green targets and could work in tandem, rather than discourage, the industry becoming more efficient or switching to cleaner energy.

Tucker commented, “I really think that CCS is just one tool available in the fight against climate change, one piece of the puzzle. The world’s population and energy demand is still growing and this needs to be met. CCS is going to be absolutely vital for this. It has a huge role to play in addition to alternative fuels, renewable energies and also increasing energy efficiencies. It will be especially vital in industries and sectors where we have energy intensive processes. Action is needed now, and as more of these projects come to light, the technology will become cheaper and the process will be far easier to implement.”