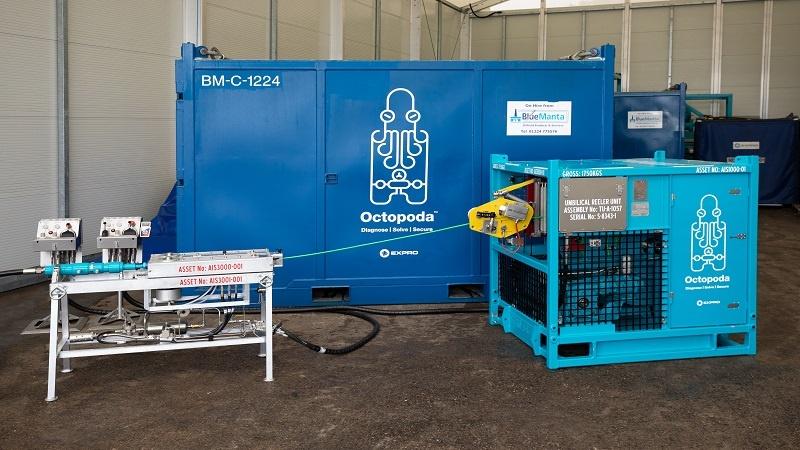 Ferguson began by noting that it is an exciting time to be involved in well integrity, an area which is attracting more interest from the industry each year. At Expro, ten years ago the main focus of the Well Intervention portfolio was production optimisation, whereas now 50% of its portfolio is well integrity related. To this end, Expro has recently introduced two new technologies to add to their product offerings to serve this market.

As Ferguson continued, fibre optics is nothing new to the industry and has, for many years, been permanently deployed in wells to monitor wells and identify problems. However, having this installed from the start of the well’s production is, for one, very costly (could amount to around US$500,000) and can also cause problems down the line. For instance, if an operator is relying on these fibre optics 10-15 years after installation the equipment may not function as effectively, with the fibre darkening for instance, meaning operators may not get the correct results they need when they need them.

Expro, therefore have introduced Distributed Fibre Optics Sensing (DFOS) Slickline which is able to be deployed into a well using a standard slickline unit. The DFOS Slickline service means that an operator only needs to deploy the fibre optics when and where they need it, rather than having it permanently installed from the start of the wells life. Expro has the capability to retrofit the fibre into the well for a few hours, get the required results and then it can be redeployed onto the next well – a development with the capacity to optimise capex at the start of a well’s life and opex throughout its life. The DFOS Slickline is capable of diagnosing a range of issues such as tubing to casing leaks, flow behind casing, gas lift valve leaks, leaks at packers, leaks at casing shoes, sustained casing pressure and sand protection.

Ferguson said, “One thing our solution partners worked hard on is our ability to process data on site. Traditional fibre optic can generate terabytes of data per day – we didn’t want to just hand our customers a hard disk of this at the end of the job, so having visualisation and analysis on site was very important to us. Therefore, as part of our offering, we reduce and streamline the data so it is easier to transmit and interpret – we can reduce 2.5 terabytes of raw data into a 30mb manageable file.”

The well integrity issue was swiftly identified as a side pocket mandrel having a faulty gas lift valve leaving the operator free to pursue remediation activities immediately, with the intervention equipment still rigged up onto the well. In this way a customer’s shut in well (which was costing around 2,000 barrels per day in lost production) was swiftly restored to production. Because the DFOS Slickline is so efficient, the operator can go from deployment to remediation in the same intervention and campaign.

Ferguson then turned to the Octopoda Well Integrity Solution, featuring offerings such as line plug services, sealant services and wellhead multi-tools. The crown jewel, however, is the annulus intervention (AI) service, this innovative technology enables intervention into a live annulus with a hose, this to remediate well integrity issues by the pumping of fluids and resins.

In one case study that Ferguson outlined, Octopoda AI was run into the annulus to remediate a fluid barrier. The customer had issues with plugged bleed-off line due to a high viscocity mud in the B-annulus. A subsequent influx of gas into the B-annulus caused a problem which resulted in the well being shut-in. It was estimated that a traditional lubricate and bleed operation would take around 12 months to complete, so the customer called Expro, who was able to design a tailor-made solution with a 6mm hose and tailor made well spring tool to enable intervention into the B Annulus.

To remove the sustained casing pressure, the annulus fluid was displaced with 1.5SG brine. During the operation the annulus intervention system was deployed to a depth of 49m depth below the B-annulus gate valve, a total volume of 40,000 litres of 1.5SG brine was pumped, there were no spills or incidents reported, and the operation was successfully completed with the well flow being reinstated in 25 days.

Octopoda AI can be used in a variety of applications including the removal of sustained casing pressure, spotting of resin for casing integrity remediation, corrosive fluid displacement, preparation for P&A operations and environmental and groundwater protection. Ferguson stated that some of the benefits included cost effective well recovery by restoring well integrity, efficient footprint and personnel requirements, rapid mobilisation of the technology, and a reduced requirement for a workover rig or heavy duty equipment.