At the Offshore Well Intervention Middle East 2022 conference, representatives from BP provided a detailed case study on their successful rigless abandonment of a well in Block 61, Oman.

Aala Abbas, Wells C, I & I Engineer at BP, opened the session by explaining the background of the operation. She noted that the well was drilled back in 2016, targeting the Amin formation and appraising the northern concession of Block 61. The formation is of tight gas which required hydraulic fracturing to produce, and the well was intervened post D&C immediately where the targeted zone was perforated and break down was attempted. This, however, was unsuccessful and, after attempts were made to re-stimulate in addition to extensive testing, the decision was finally made to permanently abandon the well as part of the oil and gas ministry requirement.

“Conventionally, wells P&A jobs are performed via a drilling rig which is very efficient, has a low-risk profile, is fairly straightforward but costly,” Abbas commented. “Hence, we looked into different methodologies and benchmarked them against the rig option which was projected to take 11 days and a cost of one [given as a comparative figure].”

“The second methodology was a hybrid option where the rig and rigless would be used. It would entail killing the well via coiled tubing before setting a plug and cementing the wellbore via a rig. The P&A job was expected to take approximately 12 days of operation at a cost of 1.23. This is quite high but would save rig time.”

“The other option, and the one we selected, was P&A completely through rigless. The well would be killed via coiled tubing before the setting of the plug and perforation above it would be conducted via E-line. It would then be cemented in the wellbore via the cement unit. The total duration of this methodology was approximately 22 days, and the planned cost was 0.73 with zero rig time. There were, however, disadvantages in it being non-standard, relatively higher risk profile and it was the least experienced method.”

The rigless operation, once selected, was divided into four main stages. The first was to isolate the reservoir by pumping cement via coiled tubing covering approximately 530 metres from the well TD to above the pay zone. BP then tagged the cement to confirm its placement and quality via coiled tubing and, post tag, they displaced the well back to one SG before inflow testing the plug and pressure that up to 8,000 psi.

The next stage included setting a copperhead bridge plug across the packer to isolate the shallowest reservoir section and then pressure tested to 7,000 psi. Initially they ran with tubing punch but this was unsuccessful and so they ran with 2-7/8” perforating guns, perforating just above the packer to allow reverse circulation later for the cement job. The injection test was successful with a circulation rate of six barrels per minute. 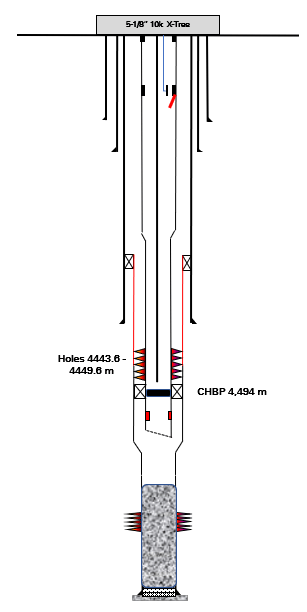 Continuing the presentation, Sultan Al Abri, Wells C, I & I Engineer at BP, commented, “For the third stage we had to confirm that we had sufficient circulation of cement through the perforation and so, to stimulate that, we pumped a high viscous pill which confirmed the circulation and capability to receive cement through the perforations. After that, we reversed circulated the cement from the A-annulus up the tubing while applying positive pressure on the tubing to avoid having cement free-falling from the annulus. The cement was then given time to cure before running slickline tag to confirm the cement placement and the quality of the cement which was successful.

In the fourth and final stage, the tree was removed, and the tubing and wellhead were cut using a thermal cutter at the surface. The remaining void, from tubing to the annulus side, was pumped with cement using a cement unit with a PVC pipe. After the abandonment the barriers in place included cement across the Amin formation, 15K copperhead bridge plug across the packer depth covering the shallowest reservoir, cement in A-annulus from packer to surface, cement in B-annulus from 13 3/8” shoe to surface, and cement in 4 ½” by 5 ½” tubing from the copperhead bridge plug to the surface. 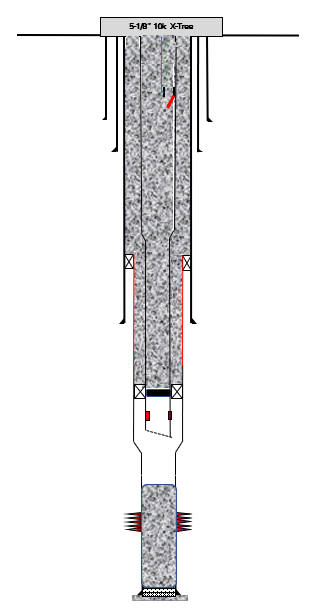 This was a non-standard operation for the company, and they therefore had some challenges. These included:
• An inability to establish circulation through tubing post tubing punch as the punch tool was not fit for purpose. To remedy that in the future they would select a perforation gun instead.
• Longer WOC duration as the shallowest section BHST was not incorporated into the lab test. In the future the company would therefore ensure lab tests would be performed in a more representative environment and the cement recipe would be optimised.
• Incorrect pumped cement volume due to on site pre-job recalculation using incorrect capacities. This could be avoided in the future by ensuring all changes to the programme are managed by MOC process.
• Inability to cut the tubing due to an inadequate gas weld cutter. The lesson learned from this was to use the plasma cutter for tubing cut.

“Despite the challenges, we delivered the abandonment job with an extra one day than planned but with a 27% less cost than initially expected. For individual service lines we had well testing delivered at about 90% of the planned cost at eight instead of ten days duration; slickline was conducted at the right cost but took an extra half day; coiled tubing was delivered at 65% the planned cost and ran for three and half days instead of five; cementing was completed at about 60% of the projected cost at approximately the same amount of time; and tree removal took the same amount of time as expected,” Al Abri concluded.

“The only service line that we exceeded the planned cost and duration was E-Line and that is attributed to the NPTs mentioned earlier where extra runs were required.”