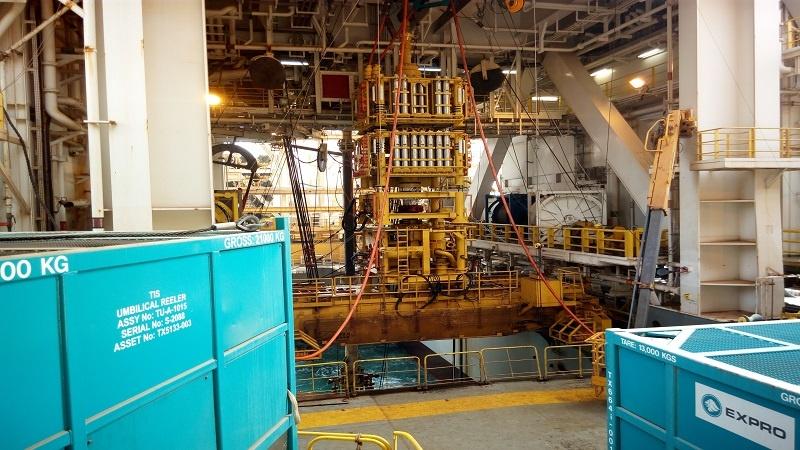 The Phase II plug and abandonment (P&A) campaign of the Chinguetti Field offshore Mauritania, which was stalled due to Covid-19 complications, has seen the successful intervention and barrier placement on all 15 wells since its resumption with projected completion of the entire abandonment scope by the end of the year, according to Expro and PETRONAS.

Phase II of the P&A campaign on the PETRONAS-owned Chinguetti Field began in late 2019, carried out by Pacific Drilling LLC, who had commissioned the help of Expro to provide an Intervention Riser System (IRS) and associated surface support equipment to be deployed from the Pacific Drilling drillship, the Pacific Santa Ana.

The award to Expro included a range of services such as the subsea well access system, surface flowhead, umbilicals, topside control equipment and IWOCS (installation and workover control system) package. Expro would also provide an onshore project management team to support Pacific Drilling throughout the project planning and execution phases. For their part, over the course of the 2019 summer, Expro carried out system integration testing on the equipment before shipping and installing it on the Pacific Santa Ana in Las Palmas in October 2019.

Expro, in turn, requisitioned for the campaign the support of Worldwide Oilfield Machine (WOM) who were contracted to provision the subsea well access system and a technical support team. This formidable team were contracted to complete the Phase II P&A project in Mauritania, which would take an estimated 360 days.

By late 2019 the campaign was in full swing (with the abandonment of the first well completed in December) so that by the end of March, subsea well access had concluded on nine of the 15 wells. Of course, then the Covid-19 pandemic struck and operators and oilfield owners across the world were forced to stall projects and forego operations as they dealt with closed borders, new quarantine rules, social distancing and keeping their employees safe. Such was the case on the Chinguetti field, where a strong start to the campaign made at the beginning of 2020 was drawn to a sudden halt with PETRONAS, due to the enforcement of travel restrictions, forced to declare force majeure on its contract with Pacific Drilling effective on 29 March 2020. Subsequently, Pacific Drilling agreed to leave the rig on stand-by at 35% of its contractual day rate until March 2021 and on the 31 March made sail for Las Palmas.

Keith Allan, Global Sales Manager at Expro, spoke to Offshore Network to reveal the challenges that his company faced during this difficult time, and how the rig was eventually returned to Mauritanian waters. He commented, “The main challenge we faced at that time was around travelling and personnel. Although we were shutdown at the end of March we still had some personnel in West Africa for a few months and faced challenges getting them home due to all borders being closed.

“We also had to keep skeleton crews on the vessel throughout the pandemic to ensure all routine and preventative maintenance was carried out on the equipment. They continued to perform to extremely high standards considering the global situation that meant extended trip durations, isolation periods and everything else that went along with travelling during the pandemic. The team were a critical part of the success of this project, providing a seamless operational start up when operations resumed.”

As Mr. Allan alluded, eventually there was light at the end of the tunnel and on 23 December 2020 the Pacific Santa Ana departed Las Palmas to resume the campaign in Africa. Since operations started up again in January, the subsea well access operations have been carried out effectively and efficiently and Allan proudly reported that as of 4 April the remaining six wells had been successfully intervened and Expro’s equipment offloaded.

Mr. Allan continued, “After the pandemic the six wells were challenging with regards to personnel movement, however all equipment and personnel continued to perform to an extremely high standard. One of the highlights for us was the ability to retrieve the Christmas trees with the IRS without requiring an additional run subsea. The IRS system’s compact nature combined with Pacific Drilling’s dual Derrick capabilities saved considerable rig time.

“This was Expro’s first venture into the IRS market therefore, we had to form new offshore and support teams to ensure we provided a quality service for the duration of the campaign. Our team’s skillsets were easily transferred to run this new system, and although we did employ experienced personnel, the crew was mainly made up of our people from the existing subsea product line.

“On a management level, it worked well. We had project managers onshore in Mauritania working from the Pacific Drilling offices to provide support for the operations duration," Mr Allan added.

Eyes set on the future

With the initial P&A of the 15 wells on Chinguetti Field the campaign has nearly reached its conclusion with some more work required to mop up the heavily lifting that has just been completed. PETRONAS, in a statement to Offshore Network, have confirmed “The campaign is progressing as planned and is projected to be completed by the end of this year.”

With vaccine distribution picking up speed across the globe and with the industry continuing to show the resilience and ability to work round the restrictions whilst maintaining the safety of their employees (as this campaign showed), there seems little reason to doubt this projection.

For Expro’s part, aside from some equipment remaining onboard for operations in a month or two, their role has been played to fruition and has marked a successful venture, which has overcome some serious challenges in the process.

As Mr. Allan concluded, “This was our first venture into the intervention riser system market, and we were able to carry out the campaign with no non-productive time (NPT) incurred. From an Expro point of view this has been a very successful project and something we are very proud and grateful to have played our part in. The success of this project has led to another contract award for a client in Australia, for a very similar scope of work and will commence in early 2022 once the equipment has completed a maintenance campaign in preparation for the work.